You are here: Home1 / Producers2 / Domenico Tappero Merlo – Canavese (TO)

Domenico Tappero Merlo is not your average Erbaluce producer. He only makes one wine: DOCG Erbaluce di Caluso “Kin,” and only 250 cases of it. He understands the potential of his terroir which was created by the Balteo glacier roughly five million years ago, depositing a unique blend of sand, silt, and pebbles to form the Morainic Amphitheater of Ivrea. “Kin” takes its name from Domenico’s grandfather who originally purchased the property in the 1950’s, although he began working the vines many years prior to establishing ownership. When Domenico replanted the vineyards roughly 15 years ago, he sought to replicate what he learned from his nonno, seeking to make wine as traditionally as possible. For this aim took cuttings from his grandfather’s vines in order to avoid relying on commercially-sold clones and grafted his new vineyards, almost immediately rewarded by the results that he achieved through organic farming – sowing legumes in the rows and even using cow’s milk in place of sulfur to combat oidium.

Each bottle is aged at least four years (eighteen months in 20HL neutral oak followed by 2.5 years in bottle) before release, a treatment that few growers can afford to give their wines. Erbaluce’s razor-like acidity and minerality make it a wine that is quite compelling with some aging, especially in the capable hands of Tappero Merlo. 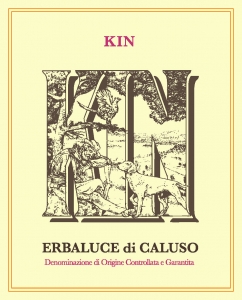 This wine is made entirely from Erbaluce grapes cultivated on guyot with sandy land of Morainic Amphitheatre of Ivrea originated from the glaciers. Kin is an olfactory treasure chest which gives off delicate mineral notes with an intense perfume of thyme, rosemary, herbs and wildflowers. Every drop of KIN contains strong essence of granite spirit of Monte Bianco, Monte Rosa, Cervino, Gran Paradiso to remember how the wine can be a true interpretation of a territory and its best ambassador.

To taste KIN as its best, it should be served at a temperature of 14/15° C opening the bottle at least one hour prior to consuming.

Maps were disabled by the visitor on this site. Click to open the map in a new window.
Casina di Cornia – Castellina in Chianti (SI)