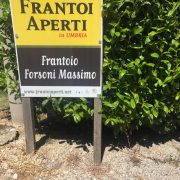 I came to know Massimo Forsoni through his aunt, Dora Forsoni, a 68-year-old winegrower/huntress and proprietor of a small winery in Montepulciano (SI) called Az. Agr. Sanguineto. Before I moved to Italy to set up Giannoni Selections in 2014, I tried to attend Vinitaly — Italy’s annual wine trade show held in Verona — as often as I could, which meant tasting with Dora and her life partner Patrizia almost every spring. Not only was I introduced to Sanguineto’s sangiovese-based wines in Verona, but I inevitably got to know other extensions of Dora as well, namely her wild boar salumetto and the extra virgin olive oil made by her nephew, Massimo. Dora Forsoni may be minute in size but she is by no means small in character. As the commander-in-chief of her local, all-male hunting chapter just northeast of Montepulciano, she is a ball of conviction. When hunting, she evidently spends most of her time perched in trees, waiting for her prey. (This way the beast is unable to sense her odor and presence as she attempts to seal their fate.) She essentially takes a sledgehammer to many of Italy’s conventions, especially those regarding viticulture, family, gender, and sexual orientation. Upon meeting her, it becomes obvious enough to just embrace all aspects surrounding Dora, including the olive oil.

We managed to develop a rapport against the backdrop of a dizzying trade show, unignorably distant from her Tuscany. Even though we connected infrequently, Dora remembered that I worked in a specialty foods/wine store and was sure to have me taste Massimo’s recent harvest, preparing a small plate of bites to accompany her wines. It always included a salame that she had hunted and cured herself – wild boar – and Tuscan bread, you know, the kind without salt, drizzled with Massimo’s peppery, extra virgin olive oil. However, she never bothered to explain what distinguished his extra virgin from others. Maybe it was my Italian back then? I don’t know. For Dora, a product is either good or not good and beyond that there isn’t much discussion. In her sort of tough, butch, Central Italian way she had decided that if I recognized that Massimo’s oil was good, I could sell it.

This past April I revisited Sanguineto’s Vinitaly stand, this time as an importer and proprietor of my own company. It was as if I was trying Massimo’s extra virgin for the first time, considering it for Giannoni Selections’ portfolio rather than that specialty foods shop in Cambridge. Sensing this, Dora called Massimo on the spot and handed me her cell phone. I was a little taken aback; it was impossible not to feel pressured with the producer on the phone. But it was Dora! And Massimo was lovely! We chatted for a few minutes and I made tentative plans to visit him in Umbria few weeks later.

Shortly thereafter I headed to Umbria and met Massimo in Roselli at his Frantoio Forsoni, located in Umbria’s picturesque Colli Martani, just outside of Spoleto. It became quickly apparent that like Dora, but in his own quiet and focused manner, Massimo only believes in top quality. He showed me the workroom where the olives are delivered and processed. It’s not enormous but it is pristine. Here he pointed out the latest technology, explaining each of the machines (many with temperature control) that carry out the cleaning, slitting, pit removal, malaxing, centrifugal extraction, and vertical decanting. Producing olive oil short of the extra virgin category isn’t for him; he opts to send away the pomace (which still has quite a bit of juice remaining in it) to steer clear of any further refining activities. Massimo’s oil, once extracted, is stored in stainless steel drums in the naturally cool cellar below the workroom.

To give you an idea of the other end of the spectrum of production, in Spain’s Jaén (Andalucía), the crop can be systematically harvested using large, crab-like machines that shake the young trees, causing the olives to fall to the ground to be later vacuumed up. Massimo’s reality is quite different. Everything must be done by hand in his groves because of the steepness and promiscuity of the terrain. Interspersed on some of his slopes are other fruit trees that share the arid, rocky soils. Further, harvest is carried out exclusively during morning hours so that the olives arrive still cool at the mill, which is essential for fragrance and overall freshness. The way Massimo sees it, extreme cleanliness and attention at to detail are crucial at every step, not just during the harvesting/pressing stage. Otherwise all the work during the year in the groves would be futile.

As I was saying goodbye, it occurred to me that even if I wasn’t necessarily looking to import olive oil before April, it would be difficult to say no to a producer like Massimo Forsoni who takes estate extra virgin olive oil to another level. It’s extremely rare to find an extra virgin that is cultivated, pressed, and bottled by the same person and produced on such a small scale. Perhaps more importantly, the quality of Massimo’s oil speaks for itself – just as Dora instructed it should.